50 STORIES OF TRANSFORMATION: More than a tree removal team

Disasters happen spontaneously and are very seldom planned, Kenton Hunt, state disaster relief director for the Baptist Resource Network (BRN) of Pennsylvania/South Jersey quipped as he thought about how to describe the incredible work accomplished through disaster relief ministry. “When disasters happen, we’re an organization – Southern Baptist Disaster Relief – that is there at the beginning. A disaster happens today, we’re going to try and be there tomorrow. You don’t necessarily go into a response knowing all the details, so that involves walking by faith.” 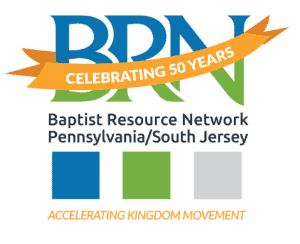 HARRISBURG (BRN)–Disasters happen spontaneously and are very seldom planned, Kenton Hunt, state disaster relief director for the Baptist Resource Network (BRN) of Pennsylvania/South Jersey quipped as he thought about how to describe the incredible work accomplished through disaster relief ministry.

“When disasters happen, we’re an organization – Southern Baptist Disaster Relief – that is there at the beginning. A disaster happens today, we’re going to try and be there tomorrow. You don’t necessarily go into a response knowing all the details, so that involves walking by faith.”

A concept that is now familiar to Hunt, as he has been walking by faith and working in disaster relief for most of his life.

Hunt continued: “I guess I got into disaster relief by working in a church and a town where there was an actual disaster. So, way back in 1996 – right after the wheel was invented – there was some major flooding. People lost their lives, and our church parking lot became a site where a mass feeding kitchen – where one of our mass feeding kitchens – was set up. That was really the beginning of my interest in it, which grew deeper really with every step.”

“I didn’t start, or actually, I didn’t get my training until after 9/11. I’m not even sure who introduced me to disaster relief, because I hadn’t heard of it before 9/11,” said Slagle.

“My first real disaster relief call was Hurricane Katrina, in Biloxi, Mississippi. Seeing the work that was done there and the people that were being reached with the Gospel… it just convinced me right then and there that this is what I want to do.”

“A ‘Blue Hat’ would be considered like a unit leader. It’s a hierarchy – it’s an extra level of training and responsibility that I’ve come to love and enjoy doing,” said Slagle. “I’ve always told people if I was independently wealthy, I would do disaster relief full-time.”

Throughout their years of working in disaster relief, both Hunt and Slagle have had their fair share of traveling from state to state and having Gospel-sharing encounters.

“I’m sure Kenton could probably sing that Johnny Cash song, ‘I’ve Been Everywhere,’… I haven’t been to as many places as he has,” said Slagle. “I’ve been to Biloxi, down south after Katrina, the Carolinas I’ve been to several times, New Jersey, and a lot in Pennsylvania. I have not yet had the opportunity to go overseas – to Haiti or Puerto Rico – but that’s still an option for me. I’ve got my passport. I’m ready to go… [if] things line up, [and] God says, ‘Go,’ I’m gonna jump on a plane.”

Slagle also shared no matter how many places he travels to, or where he goes, he experiences a similar need among disaster victims.

“I’ve learned that the different places that I go, the hurt is the same. The loss, the confusion, and the frustration from the victims is universal.”

He continued: “I think it’s one of the most powerful ministries that Southern Baptists can do, because you meet people where their need is the greatest. You give them food, you make their house secure, you help them clean up, and then you share Jesus – what better ministry can we have?”

Hunt added to Slagle’s thought, by stating, “Certainly when a person receives Jesus Christ as Lord and Savior, that is a transforming moment in their lives. Disaster relief is one of those ministries that really kicks the door open for sharing the Gospel with people.”

To ensure that these physical and spiritual needs are met, the Southern Baptist Disaster Relief team, along with other state and national organizations, recruit a multitude of volunteers.

“Churches can compile the skills that they have in their congregations to help go rebuild a home, and that’s tremendous,” said Hunt.

“Everywhere we go, we’re working with other volunteers wearing the same gold color that we’re wearing, who have come up the way God’s led them as a volunteer in their state. We can come together and work together because we’re trained the same, and we have the same passion for Christ and the Gospel…. our motives don’t get mixed up.”

However, no matter where the volunteers or workers come from, each job still produces the same exciting and fulfilling notion, Hunt said.

“We get excited when we see the whole thing go full circle. You know, go from destruction to now the family walking into their house and restarting – that’s very fulfilling,” he added.

“It’s also sort of a metaphor, isn’t it, for what Christ does in our lives, gives us a new start.”

For more information on disaster relief, or how you can volunteer, contact Kenton Hunt at kentonh@brnunited.org or visit online at www.brnunited.org/dr.

Listen to the podcast interview:

The “50 Stories of Transformation” series, told in honor of the Baptist Resource Network’s 50th anniversary, highlights the many ways God has moved throughout Pennsylvania, South Jersey and beyond.  Your generous support of the Cooperative Program  makes this ministry possible and fuels  evangelism and outreach  in our local churches and all over the world! Thank you!

Macala (Leigey) Mays is a graduate of Edinboro University's Communication, Journalism and Media graduate program. Her hobbies include broadcasting, photography, and collecting a random assortment of vinyl records. She also writes news for a local radio station in Erie.