Generational Wins Prayer: That religious freedom and freedom of speech would be restored to every civilian

Pray that Christians would be able to express their biblical values without being silenced or targeted by the government or the laws it instates.
By Alliance Defending Freedom

Each day, Christians utilizing the talents God has gifted them with are facing threats to their freedom of speech and religion. It seems almost impossible to creatively express yourself through your biblical values without being silenced or targeted. What is interesting is that many of the ideas that make our Constitution unique were born in Virginia. So, it’s disturbing that this founding state seems to have turned its back on one of the most important tenets of our republic: The protection of free speech.Let’s look at the details of Bob Updegrove’s story and see how he is standing up for his constitutional freedom.

Bob started out photographing school events and making slide shows while volunteering with a Christian youth ministry. Today, as a photographer and the owner of Bob Updegrove Photography, Bob creates beautiful photographs for events of all kinds. There’s no question that Bob’s photographs are works of art, and as an artist, Bob expresses himself through his work.In April 2020, former Virginia Governor Ralph Northam signed the so-called Virginia Values Act into law. Among other negative consequences, this law threatens artists who hold different beliefs than the government’s preferred views with censorship, fines, and even closure of their businesses. The law forbids Bob from publicly explaining his religious reasons for only creating artwork consistent with his beliefs on his business’s own website. Additionally, the law puts Updegrove to a Hobson’s choice: Create photographs celebrating same-sex weddings; stop his wedding business altogether; or violate the law and face court orders forcing him to create artwork contrary to his faith in addition to damages, attorney’s fees, and fines up to $50,000 initially and $100,000 per additional violation. Altogether, these penalties could easily bankrupt Bob.Bob is a Christian; he simply can’t create messages that go against his deeply held beliefs about marriage and, because free speech is protected by our Constitution, he shouldn’t have to choose between going against his beliefs and keeping his job. Yet, that is exactly what the “Values Act” will force him to do. That’s why Bob is taking a stand and challenging this unconstitutional law in court.

The U.S. Constitution protects every person’s God-given right to free speech. That doesn’t just protect people from the government censoring their speech. It also prevents the government from forcing them to speak messages that go against their deepest beliefs.Not only that, but the Constitution and the Supreme Court have made it clear—as recently as four years ago in the Masterpiece Cakeshop v. Colorado Civil Rights Commission decision—that the government cannot treat some people worse than others based on religion. But that’s what Virginia is doing: threatening artists like Bob Updegrove because his beliefs about marriage differ from the governments’ orthodoxy. 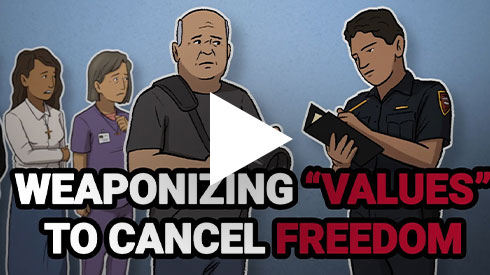 How you can pray: