Almost all churches and most churchgoers are now gathering in person

More U.S. Protestant churches are gathering in person since the COVID-19 pandemic began, and pastors say most churchgoers have returned as well.
By Aaron Earls

NASHVILLE, Tenn. — More U.S. Protestant churches are gathering in person since the COVID-19 pandemic began, and pastors say most churchgoers have returned as well.

Almost all U.S. Protestant pastors (98%) say their church met in person in August, according to a new Lifeway Research study. This marks the highest percentage of churches holding in-person services since March 2020, when COVID-19 became a national health issue. 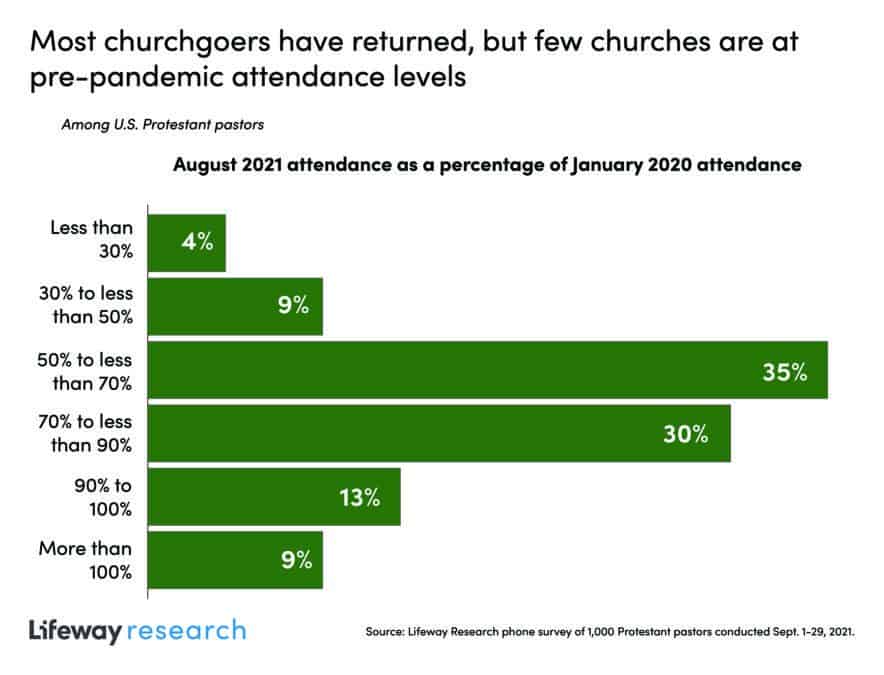 During the first week of March last year, 99% of Protestant churches met in person. By the end of the month, only 7% did so, according to a previous Lifeway Research study. A majority of churches didn’t start holding in-person services again until June 2020. By September 2020, 87% met physically, but that dropped to 76% in January 2021, according to Lifeway Research studies conducted at the time. In August 2021, however, only 2% of churches did not meet in person at all.

“Every church’s path has been different during the pandemic, and each stage of resuming specific aspects of ministry is significant,” said Scott McConnell, executive director of Lifeway Research. “Worshiping together as a physical assembly of believers in Jesus Christ is an important element of the Christian faith. For almost all Protestant churches, this stage of ministry is now active again, though other aspects of ministry may not be.”

Return of the churchgoer?

Earlier this year, even as fewer churches held in-person services, 91% of churchgoers told Lifeway Research they planned on attending church services as much as they did prior to the pandemic or even more once COVID-19 was no longer an active threat to people’s health.

By September 2020, U.S. Protestant pastors reported most churchgoers had returned. The average church drew 63% of their pre-pandemic attendance levels. That dipped slightly in January 2021 to 60%. By August, the average pastor saw 73% of their church members in person on Sunday morning. 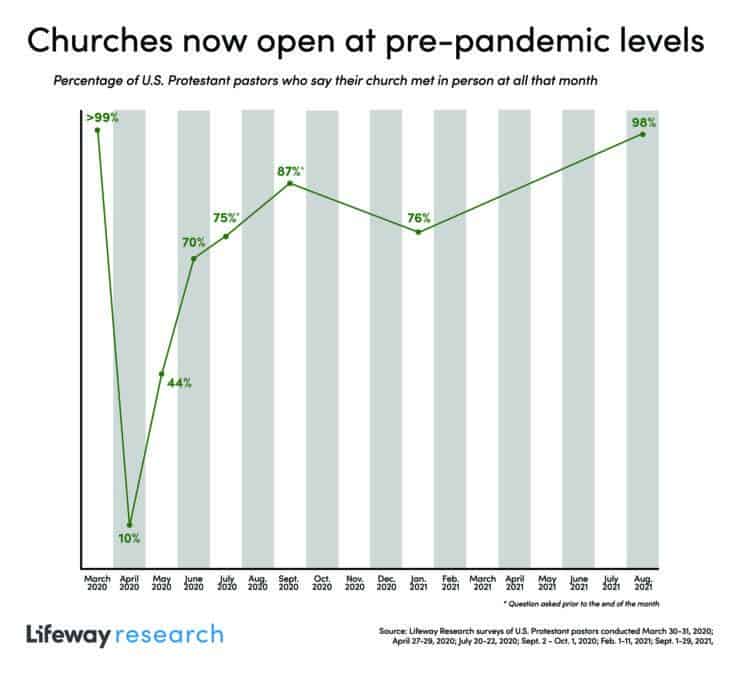 “Many pastors and church leaders are anxious for the whole congregation to gather physically together,” said McConnell. “Worship attendance is improving, but there is still a large gap between today’s in-person attendance and pre-COVID levels.”

While some churches are still below 50% of their January 2020 attendance levels, others report growing during the pandemic. Almost 1 in 8 (13%) say they had less than half of their pre-COVID-19 crowd in August. That percentage is down substantially from earlier in the pandemic. In both September 2020 and January 2021, more than 1 in 4 churches had less than half their normal Sunday morning crowds.

Some pastors are finding it harder to bring back their pre-pandemic churchgoers. While African American Protestant pastors were only slightly less likely than their white counterparts to say they met in person in August (95% to 98%), African American pastors were 12.5 times as likely as white pastors to say their attendance was less than 30% what it was before COVID-19 (25% to 2%).

The small church, however, has had an advantage in the pandemic recovery period. Pastors of churches with pre-COVID-19 attendance levels of fewer than 50 people are more likely to report August 2021 attendance back to or exceeding their previous levels. Almost 1 in 4 small church pastors (23%) say they had 90% to 100% of their pre-pandemic attendance in August, while 1 in 5 (19%) report higher attendance compared to January 2020.

“Most small churches are still not back to pre-pandemic attendance, but far more of them are reaching this point than larger churches,” said McConnell. “It’s possible small churches are aided by perceived safety of a naturally smaller gathering, differences in technology options for gathering online, or the strength of relational connections. But regardless of the reasons why, in-person worship attendance trends currently look promising for small churches.”

For more information, visit LifewayResearch.com and view the complete report.

Aaron Earls is a writer for Lifeway Christian Resources.