With 22.3 percent of our Southern Baptist congregations being non-Anglo and many worshipping in multiple languages across America, the Southern Baptist Convention may be the most multi-ethnic and multi-lingual denomination in the United States.
By Ronnie Floyd

NASHVILLE (BP) – Last spring, I commissioned our Great Commission Relations and Mobilization Team to discover where we were in our Southern Baptist congregations by race and ethnicity from 1990-2018. The team consists of Julio Arriola, Peter Yanes, Charles Grant, Ashley Clayton and team leader Willie McLaurin. Yanes, executive director of Asian American relations, was asked to lead this study and secured the needed assistance to accomplish the project.

This fall, one of the most informative and encouraging sessions we had with the leadership team of our SBC Executive Committee staff was with Minh Ha Nguyen. Minh Ha is the manager of research data and delivery for the International Mission Board and the president of the Southern Baptist Research Fellowship. He has almost completed his Ph.D. from Southeastern Baptist Theological Seminary with a concentration in Applied Theology on the subject of globalization, urbanization and migration. Minh Ha worked with our team to present this study based upon research.

Let me share what we discovered thanks to Minh Ha’s research using the Annual Church Profile reports from 1990-2018. Below, you will see graphics that illustrate what we have discovered as well as a few brief observations that we found helpful. 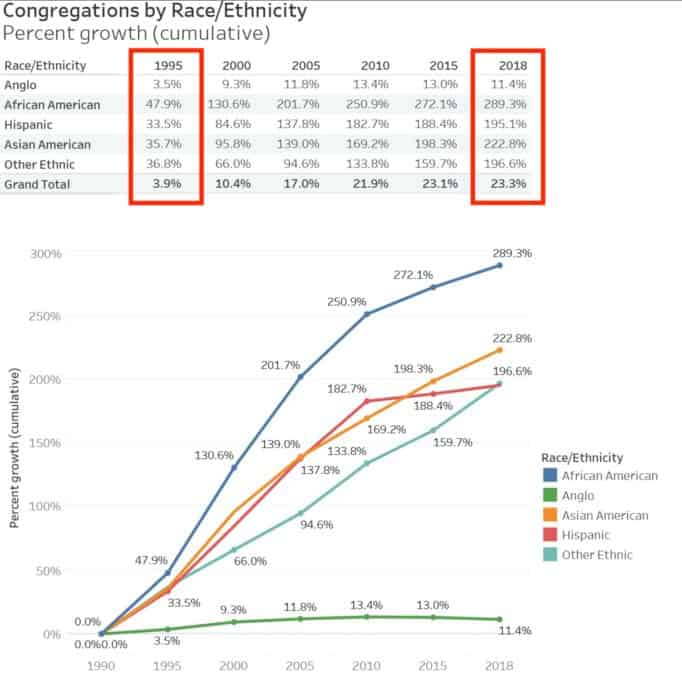 Ten observations from this research

There are 10 observations from this research by Minh Ha Nguyen and our team that I want to share with you:

Finally, be encouraged Southern Baptists. While challenges are revealed by the research, we know it also reveals the SBC is growing more diverse in non-Anglo or multi-ethnic congregations.

We will go forward to the future together.

Now is the time to lead.

Ronnie Floyd is president and CEO of the Southern Baptist Convention’s Executive Committee.